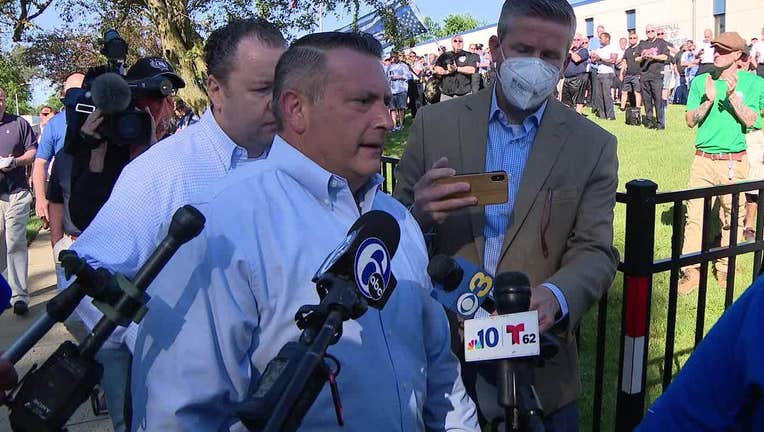 PHILADELPHIA - A Philadelphia judge has reinstated some of the previously dismissed charges against a former Philadelphia police inspector Joseph Bologna, who was accused of striking a protester with a baton last summer.

Judge Crystal Bryant-Powell reinstated two charges on Tuesday, including simple assault and possession of an instrument of crime. Counts of aggravated assault and reckless endangerment were dismissed by Bryant-Powell.

Bologna was originally charged back in June of 2020 after he was captured on camera striking a student protester with a metal baton during a peaceful protest last summer, according to court documents.

Back in January, another Philadelphia judge dismissed the charges against Bologna. Bologna's attorney said at the time that a lack of evidence from witnesses led to the charges being dismissed.

Video of the incident circulated around Twitter and sparked the ire of District Attorney Larry Krasner who would later bring charges against Bologna. Police Commissioner Danielle Outlaw said she was "deeply concerned" about reports of excessive use of force by police against peaceful protesters.

Outlaw suspended Bologna for 30 days with intent to dismiss. Bologna later turned himself in.

Krasner released a statement on the reinstatement of the charges against Bologna on Tuesday afternoon, stating that his office "seeks every day to hold those who cause harm accountable in a fair and evenhanded way, regardless of the office they hold or the badge they wear."

"We respectfully disagree with the court’s decision to dismiss the felony Aggravated Assault charge, given the seriousness of the head injury suffered by the victim, which required multiple stitches and staples. Because a just resolution of this matter is of great public interest and importance, we will be reviewing our options for the best course forward as prosecutors on behalf of the Commonwealth," Krasner added.