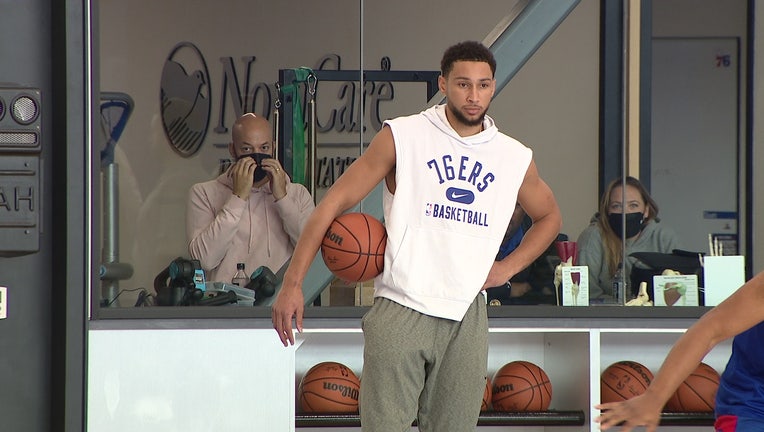 PHILADELPHIA - The Philadelphia 76ers have reportedly fined All-Star point guard Ben Simmons for missing Thursday’s game amid reports that he has been uncooperative with the team’s medical staff.

ESPN reports that Simmons was fined his $360,000 game check for Thursday’s game in Detroit against the Pistons.

Adrian Wojnarowski reports that the team plans to continue fining Simmons until "he cooperates with team physicians on his mental health issues and fulfills other basketball-related obligations."

Simmons has yet to return to the court for the Sixers after his offseason holdout and eventual return to the team culminated in his suspension for the team’s season opener. He later addressed the team before their home opener and reportedly explained that he was not yet mentally ready to play.

Since then, ESPN reports he has worked with mental health professionals through the National Basketball Players Association, and not the 76ers. He has reportedly been showing up at the team’s facility for some basketball activity with coaches and teammates, ESPN reports.

Simmons averaged 15.9 points, 8.1 rebounds and 7.7 assists over four seasons with Philadelphia, which drafted him No. 1 in 2016 out of LSU, where he played only one season. His defining moment as a Sixer came when he passed up a wide-open dunk against Atlanta in the second round of last year’s playoffs that would have tied the game late in Game 7. Simmons took the blame for Philly’s early postseason exit.

The Sixers have not provided a timeline for a potential Simmons return. Simmons has four years and $147 million left on his contract.

With Simmons out of the lineup, and Tobias Harris out with COVID-19, the Sixers have started the season with a 7-2 record – the best record in the Eastern Conference.