CLEARWATER, Fla. - Philadelphia Phillies manager Joe Girardi wants to have a healthy team down the stretch this year and says he will be diligent in making sure his players aren’t overworked early in the season.

“I take it personal when a guy gets hurt,” Girardi said. “I think there is enough talent to win.”

The Phillies dealt with a variety of injuries last year, including left fielder Andrew McCutchen missing the final four months of the season with a torn ACL. Reliever David Robertson missed most of 2019 after Tommy John surgery and is expected to miss a large portion of this season, too.

“If you ask our training staff, he's driving them nuts because he wants to get back on the mound,” Girardi said of Robertson. “And he’s not to that point. But he’s healing great, and we’re excited about where he’s at.”

Expect the Phillies to go slow with McCutchen to start spring training, as well, preparing him to be ready for the start of the season. He led the major leagues in walks before the injury, and Girardi thinks Philadelphia’s struggles really began last season without McCutchen’s presence at the top of the batting order and in the clubhouse.

“I think this team changed a lot when Andrew McCutchen went down,” Girardi said. “Don’t be surprised if we take it slow with him. I always thought players could play about three weeks of games and be ready.”

Girardi concedes major injuries like McCutchen’s are going to happen sometimes. It’s injuries caused by fatigue he hopes can be limited with smarter workload management during the season.

“Fatigue injuries are something that I feel it’s our job to really assist the player in preventing them,” Girardi added.

Girardi believes preventing these injuries and having a healthier team in August and September will give him more flexibility in how he can use players down in key games that potentially could determine whether the Phillies make the playoffs.

“You start to ask a little bit more out of players sometimes when you’re competing for a spot in September,” Girardi said. “For example you know I’m not a guy that uses relievers three days in a row, but in September, if I feel the player can handle the workload, I might ask a player to do it one September day.” 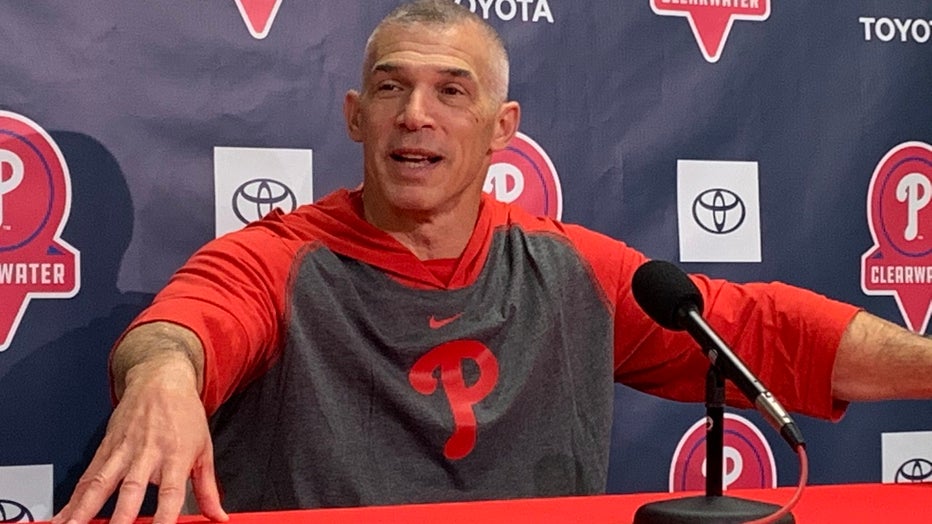 Reliever Seranthony Dominguez continues to progress from the ulnar collateral ligament injury that forced him to miss much of last season. Girardi said his workload will be managed for spring training through the start of the season.

“My job is to protect him from himself,” Girardi said. “Is he a guy not to use in back to back days early on? Yeah, he is.”

NO NEED TO ADDRESS CHEATING

Girardi said he has no plans to specifically address the Houston Astros sign-stealing scandal because the Phillies were not a team that was doing anything improper.

He will, however, make sure his pitchers and catchers are protected from other teams potentially stealing their signs.

“I’ve already starting addressing how we protect our stuff and our signs and talk to catchers and pitchers and plans that we have in spring training to start incorporating some of the stuff so it’s not foreign when we get to the first day of the season,” Girardi said. “We’re going to do things the right way and we’re going to look for every advantage there is. If the pitcher is tipping, we’re going to use that. And we’re going to protect…make sure that our guys aren’t tipping.”