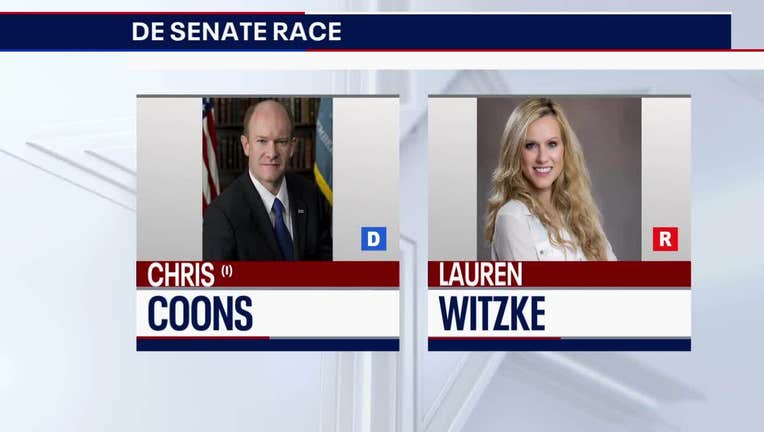 DOVER, Del. - Democratic Senator Chris Coons will hold onto the Delaware Senate seat once held by Joe Biden after fending off a challenge from GOP newcomer Lauren Witzke, the Associated Press projects.

Coons, who is has held his seat since the 2010 special election to replace Ted Kaufman, who was retiring after being appointed to replace Biden when he assumed the vice presidency alongside President Barack Obama.

During his time in office, Coons has served on several committees, including the Senate Judiciary Committee, and has touted his willingness to reach across the aisle.

Following the death of Justice Ruth Bader Ginsburg, Coons was among the Democrats on the judiciary committee who said the Senate should honor Ginsburg's 'dying wish' and wait until after the presidential inaugural to confirm any potential replacement.
Republican challenger Lauren Witzke faced off with Coons in the primary election after defeating her party's endorsed candidate in the primary.

Witzke had face controversy during her campaign and faced questions over a meme following Ginsburg's death. She had also promoted QAnon and defended the Proud Boys, a male-only group of neo-fascists who describe themselves as “western chauvinists” and have been known to engage in street violence.

Witzke had run on an “America First” platform that includes a 10-year moratorium on immigration, welfare reform limiting benefits to married couples with children and federal funding for faith-based substance abuse recovery programs. She was a proponent of gun ownership rights.