PHILADELPHIA - Gun violence continued to surge in Philadelphia the night after the city eclipsed 300 homicides on the year, more deaths at this point of a calendar year in over a decade.

The bloodiest shooting of the night happened in Southwest Philadelphia where police say five people, including a 14-year-old girl, were shot at a cookout. Police say the shooting happened both inside and outside a residence on Ruby Terrace around 8:30 p.m.

According to investigators, four men between the ages 25-38 suffered multiple gunshot wounds. One of the victims, a man 32-year-old man, was shot in the legs and died at Penn Presbyterian Hospital.

Officers drove four of the shooting victims to the hospital, including a 14-year-old girl who suffered a graze wound and a 29-year-old man who was shot twice in the chest.

Police did not report any arrest following the shooting, but they believe one shooter fired over a dozen shots.

About an hour before the quintuple shooting in Southwest Philadelphia, officers said three people were injured by gunfire in Kensington.

Officers drove the victims to Temple University Hospital where the 40-year-old was placed in critical condition. The 54-year-old woman is expected to recover.

Police say a third shooting victim, a 20-year-old man, arrived at the hospital with gunshot wounds to the ankle and hip. He was also placed in stable condition. 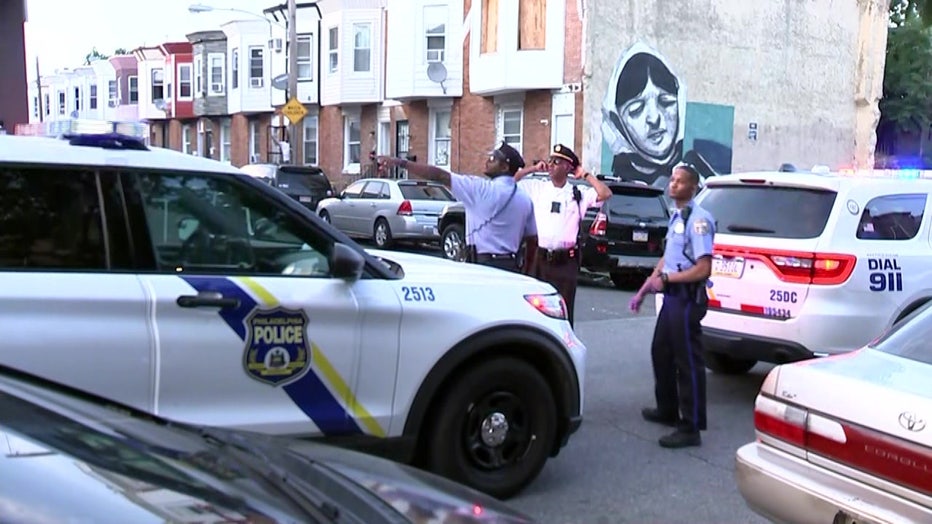 Police say two women and a man were injured by gunfire Friday night in Kensington.

As Friday turned to Saturday, police responded to a fatal shooting at a gated apartment complex in Philadelphia's East Falls section.

According to police, a 27-year-old man was gunned down around 2 a.m. at the Alden Park apartment complex on the 5500 block of Wissahickon Avenue.

No arrests were reported immediately after the shooting. Investigators have not said what sparked the fatal shooting.

Police also investigated four more shootings overnight across the city, including a double shooting in West Philadelphia that left a 16-year-old boy in critical condition.

The latest data from the Philadelphia Police Department shows a 32% rise in deadly crimes in 2021 as the city logged over 300 homicides. The sharp rise in deaths comes a year after the city saw nearly 500 homicides in 2020.

In his latest address to the city urging an end to the bloodshed, Philadelphia Mayor Jim Kenney said he is "devastated by the unrelenting rise in gun violence" and laid blame on the "the lack of commonsense federal gun laws."

"One life lost prematurely to violence is one too many, and I am devastated by the unrelenting rise in gun violence that has tragically claimed the lives of over 300 fellow Philadelphians so far this year," Kenney said in a statement on Friday. "While this is an appalling national trend because of the lack of commonsense federal gun laws, the local violence we’re experiencing is tearing families and communities apart here at home, and inflicting trauma on Philadelphians of all ages."

Commissioner Outlaw followed Mayor Kenney by issuing her own statement in which she called the brazen gun violence "appalling" and doubled down on her department's commitment to deterring crime.

"The Philadelphia Police Department remains committed to ensuring the safety of all residents and visitors of Philadelphia. So far this year, we have taken almost as many guns off of the streets than we did in all of 2020," Outlaw said in part.

"Our officers remain laser-focused on enforcing the law while deterring crime, and as I have spoken about previously, we continue to partner with local, state, and federal law enforcement to improve our operations and have access to technology that can help the PPD curb violence more effectively."