Dougherty, Henon both plan to appeal conviction; face up to 20 years in federal prison

U.S. Attorney Jennifer Williams called the verdict "a strong message to the political power players of this city and any city that the citizens of Philadelphia will not tolerate public corruption as business as usual."

Prosecutors said Dougherty kept Henon, a union electrician-turned-Philadelphia City Council member, on the payroll to help his union keep a tight grip on construction jobs. During the six-week trial, the government played wiretaps of the pair speaking about Dougherty’s interest in issues before city council. 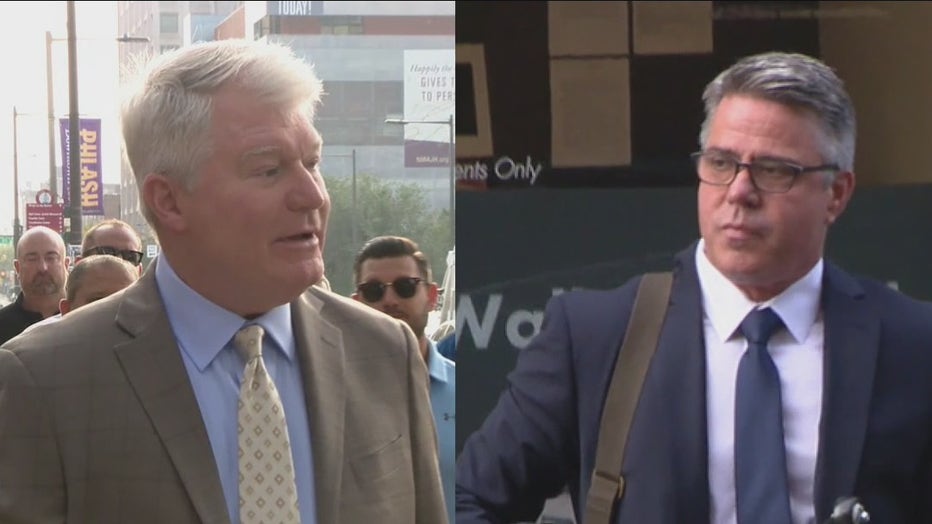 Their convictions follow a lengthy FBI investigation of activities within the chapter of the International Brotherhood of Electrical Workers that Dougherty leads, but will not mark the end of Dougherty's legal woes.

The longtime union boss still faces at least one more federal trial based on charges in the sweeping 2019 indictment.

Defense lawyers insisted that there had been no undue influence and argued that the city allows council members to hold outside jobs. The defense also questioned how it was a crime for union supporter Henon to side with Dougherty and the building trades workers he was elected to represent.

Dougherty, a major force in Pennsylvania politics, has steered more than $30 million over the years to mostly Democratic candidates, and his brother sits on the Pennsylvania Supreme Court.

"Listen we’re going to go back and regroup. Going to take my time going to meet with my lawyers and then we’ll regroup," said Doughery said after leaving court vowing to appeal.

Prosecutors over four weeks of testimony tried to show that Dougherty used Henon to press Comcast Corp. to steer $2 million worth of electrical work to a friend during cable contract talks with the city; to shut down the non-union installation of MRI machines at Children’s Hospital of Philadelphia and to investigate a towing company that seized Dougherty’s car.

John Dougherty spoke with FOX 29's Jeff Cole after a jury found him guilty in a federal corruption trial.

Dougherty attorney Henry Hockeimer Jr. called Dougherty an older-brother figure to Henon and defended his client’s "bombastic" style. He scoffed at allegations that the salary and Philadelphia Eagles tickets he passed on to Henon amounted to bribes.

"﻿Justice was not served today, and I can’t tell you how disappointed I am by the jury’s decision. What Councilman Henon and I were found guilty of is how business and politics are typically and properly conducted. I will immediately appeal and have every confidence that I will prevail in the Third Circuit Court of Appeals," Dougherty said in a statement.

"Today’s verdict is a strong message to the political power players of this city and any city that the citizen’s of Philadelphia will not tolerate public corruption as business as usual," said Acting U.S. Attorney for the Eastern District of Pennsylvania Jennifer Arbittier Williams

Dougherty still faces a second trial on charges he and others embezzled more than $600,000 from Local 98 of the International Brotherhood of Electrical Workers.

Federal prosecutors tried to get Dougherty sent to prison immediately. Their request to revoke his bail was denied.  Sentencing is scheduled for Feb. 2022. Both men could face up to 20 years in prison.

The jury has found both union leader John Dougherty and councilman Bobby Henon guilty in a federal corruption trial.