A 14-year-old boy has died after police say he was chased down a Philadelphia street and shot 18 times. Police say the victim was waiting for the bus prior to the shooting.

FELTONVILLE - Philadelphia police are investigating another deadly shooting of a young boy after they say a 14-year-old was chased down and shot 18 times while waiting for the bus.

Neighbors are deeply shaken over the shooting death of Samir Jefferson, at the intersection of Wyoming and Rising Sun in Feltonville around 3:30 p.m. Monday afternoon

Police say two suspects got out of a car and chased Jefferson while firing about 35 rounds from two guns. Cops say Jefferson ran a block before collapsing. He was rushed to Temple University Hospital where he was pronounced dead.

Following the shooting, Philadelphia police said two persons of interest had been taken into custody. Tuesday, they provided an update that two people were being questioned by homicide detectives in connection with the shooting.

"It’s a tragedy that somebody is going to fire over 30 shots at a teenager who is just waiting on the bus. It’s a tragedy. It’s even hard to conceive," Philadelphia Police Chief Inspector Scott Small stated. 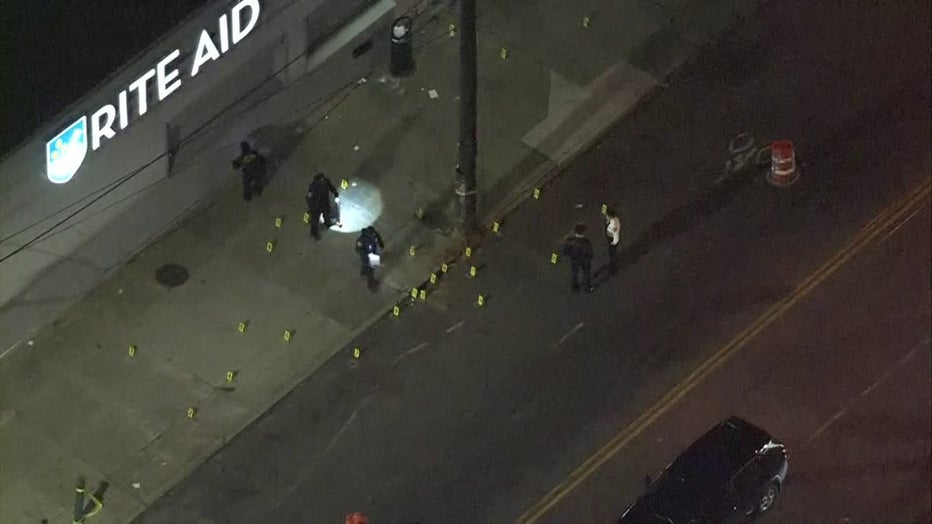 Skyfox over the scene where a teenage male, 15 or 16 years, was shot 18 times and killed in Feltonville.

The shooting follows a particularly violent weekend, in which, at least, five people were shot and killed across the city.

"Earlier today, we lost another young life to senseless gun violence--the fourth since yesterday. My heart grieves for the victims, their families, and this city. While we cannot bring back those lost, the Philadelphia Police Department will ensure that these cases are fully investigated so that these victims and their families receive closure and justice," Philadelphia Police Commissioner Danielle Outlaw said in a statement released Monday night.

The incident also garnered the attention of Philadelphia Federation of Teachers President Jerry Jordan. Jordan stated he was ‘outraged and heartsick’ following the 14-year-old's death, as well as the deaths of 16-year-old Kanye Davis, and 21-year-old Temple University student Samuel Collington. Both were killed in shootings on Sunday.

"The city has surpassed 500 murders this year, a grim milestone amidst a devastating year. Each and every one of the 506 people on that list should be alive today, and each and every person on that list leaves behind loved ones who are forever shaken by the deep and profound loss they have suffered," Jordan said. "Students in our schools are reeling from the ongoing violence. Many of those lost are our students. Many are our students' families, friends, and loved ones. The impact this violence has on school communities is incalculable."

Authorities said anyone with information is urged to contact the Homicide Unit at 215-686-3334.