Six people were injured in a shooting in the city's Germantown neighborhood late Thursday night.

GERMANTOWN - Over 80 shots were fired during a shooting Thursday night in Germantown that badly injured a woman and wounded five others, according to police.

Officers from the Philadelphia Police Department were called to the 5100 block of Germantown Avenue around 11:30 p.m. for reports of a shooting.

Video shows six gunmen exiting a white work-type van and began shooting at the group on the corner. Several members of the group returned fire at the suspects.

Police found a 21-year-old woman shot multiple times in the abdomen and drove her to Temple University Hospital where she was placed in critical condition, according to investigators.

Among the victims, police say a 20-year-old man suffered a graze wound to the head and a 19-year-old was shot twice in the leg. All five men are expected to survive, police said.

Police say three unattended cars parked on a nearby side street were also hit by gunfire. 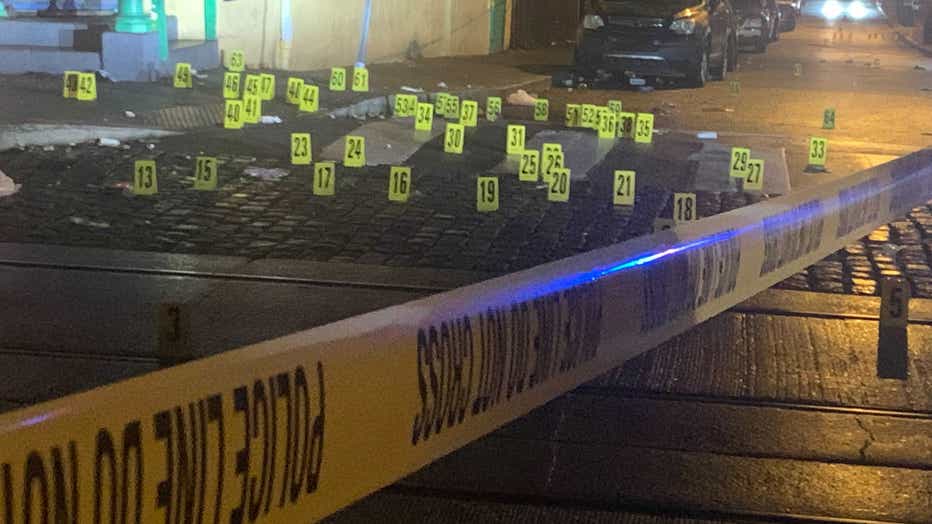 It's believed that the 21-year-old woman may have been the intended target of the shooting, but Small said that due to the number of shots fired it's hard to tell.

The van is described as having a rack on the roof and distinctive graffiti on the passenger side.

FOX 29's Steve Keeley notes that two other multi-victim shootings happened within a nine-block stretch of Germantown Avenue, including a deadly quintuple shooting that erupted outside a nearby barbershop.

Six people were injured during a shooting late Thursday night in Germantown. Police say a barrage of bullets critically wounded a 21-year-old woman and five men between 19-29-years-old.