Police say Christine Lugo, 41, was fatally shot during a robbery inside a Philadelphia Dunkin' Donuts despite complying with the suspect's demands. Sources say homicide investigators are now trying to determine if this murder is connected to a similar robbery and murder in Delaware last month.

PHILADELPHIA - Philadelphia police are offering a $20,000 reward for information leading to the arrest and conviction of a man suspect of fatally shooting a female Dunkin' Donuts store manager during a robbery Saturday morning.

The incident occurred inside the Dunkin' location on the 500 block of West Lehigh Avenue around 5:51 a.m. Saturday.

Police say the victim, 41-year-old Christine Lugo, was unlocking the front door and opening the store for the day when the suspect approached and forced her into the store at gunpoint. Surveillance video from the incident shows the suspect had been waiting outside the store prior to approaching Lugo.

After forcing Lugo to turn over some cash from the office, investigators say he shot her once in the head and fled the store in an unknown direction. 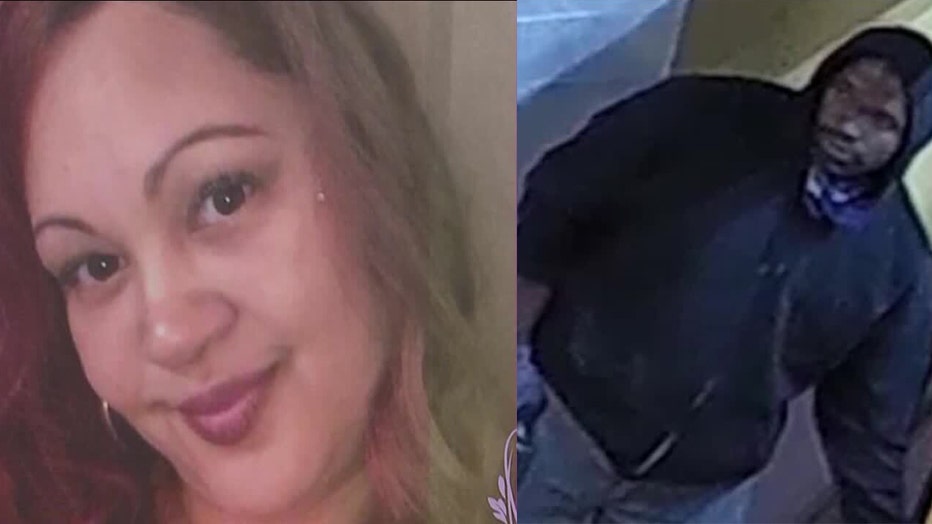 Police say Christine Lugo, 41, was fatally shot during a robbery attempt inside a Philadelphia Dunkin' Donuts Saturday morning despite complying with the suspect's demands.

Lugo was later pronounced dead at the scene.

Police have described the suspect as a Black male in his late 30s to early 40s with medium complexion, a goatee and mustache, and a medium to stocky build. He was wearing a blue zip-up hoodie, gray cargo sweatpants, light gray New Balance sneakers, an analog wristwatch on the right hand, and blue gloves with a blue COVID-19 mask.

Sources say homicide investigators are now trying to determine if this murder is connected to a similar robbery and murder in Elsmere, Delaware back in May. Phone store manager and mother of two Leslie Basilio opened her store was also forced inside at gunpoint, robbed and shot in the head.

Sources add the Cadillac Escalade stolen from Basilio in Delaware was found a week later a few blocks from the Dunkin' Donuts murder scene. Police say there are multiple similarities between the two killings, including the fact that both female managers were working alone when they were robbed and shot to death in the early morning hours.

Anyone with information about the suspect or incident is asked to contact the Philadelphia Police Department's Homicide Unit at (215) 686-3334/3335.

Police are still searching for the suspect who killed a Dunkin Donuts store manager. FOX 29's Steve Keeley has the latest at Police Headquarters.

3 recovering after overnight shootings in Philadelphia